We’ve Got You Covered

We help you diagnose your marketing and sales process gaps and recommend proven strategies for greater results.

Conversion based Google advertising campaigns, specifically designed for RTOs are our superpower.

Increase the volume of leads your RTO can handle with our personalised, high-tech and high-touch platform.

Benefit from high converting, RTO compliant landing pages and websites built for your business and your brand.

Students enquiring but not enrolling? Our expert sales training will help your team convert more students and generate more revenue.

Conversion, deliverability and direct response - we've got you covered with our proven email marketing expertise.

We offer a complete digital, onboarding strategy and platform

that fills your RTO pipeline consistently each month 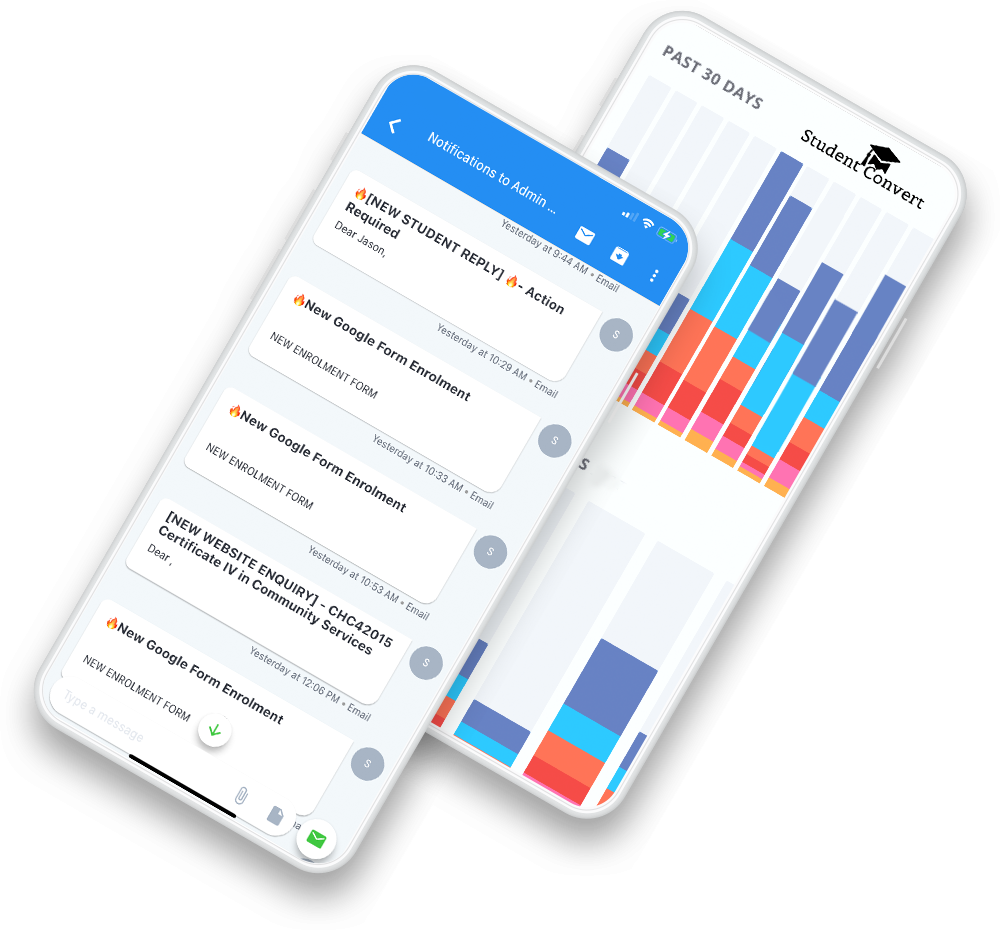 We create and automate a strategy for the entire student-acquisition process (not just lead generation).

After capturing the prospective student's interest, our Student Convert Platform maintains contact during their research journey, utilising a variety of touch points from you, so that when they are ready to enrol, you are at the top of their mind, and not another provider.

How much profit do you make from each new student who enrols?

At the beginning of every project, we come up with a strategy to make back at least the amount you spend with us in new business.

If we don’t confidently believe we can generate a positive ROI for your organisation, we won’t take on the job. We want this to be a win-win so we check the numbers to make sure it will be!

Most clients only need 1-3 new students per month to cover the cost of our services. Considering the case studies above, I’d say that’s completely doable...wouldn’t you?

Keen to learn more? Book in for a 20-minute chat with us.

We’ll talk about your business, we’ll tell you about us, and we’ll see if we’re a good personal fit for each other. 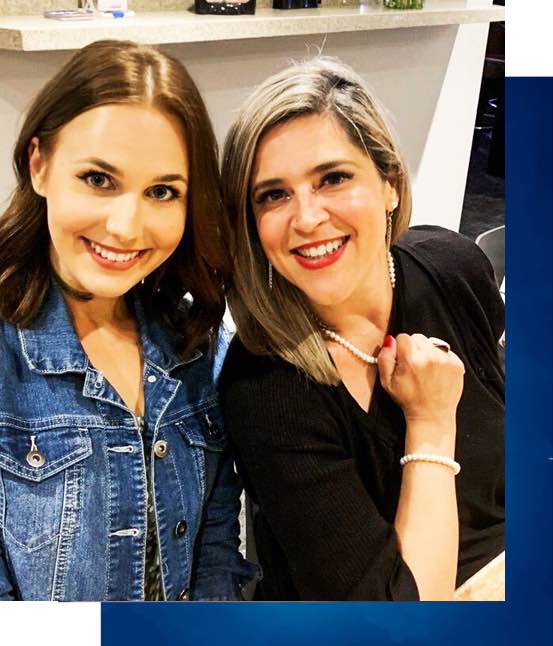 For you if: You want to take your RTO, vocational training institute, online training platform, college, or university to the next level. You’re ready to think outside the square and make the most of every single lead that comes in your pipeline by following up in creative and highly strategic ways.

The average lead takes 3 to 12 months of touch points before they become a paying customer. Savvy marketers know that it’s best to mix up your touch points so you appeal to different types of people.

Our system will allow you to follow up with your leads in ALL OF THE WAYS. Phone calls. Emails. Text messages and Voice notes.

That way, we’ll have plenty of opportunities to stay top-of-mind and catch them at just the right moment when they’re ready to take the next step with you.

"With the Lead Gen Pro package, Steve increased his response rate by 700%...and his conversions quadrupled."

When Steve came to Student Convert, he had one main problem: conversions. He was getting lots of leads for his RTO but couldn’t turn those leads into paying students.

His lead response rate was at 10% and conversions of total leads were under 1% — obviously a very expensive scenario.

After partnering with Student Convert, Steve got the click-through rate on his ad up to 11.55% (which is 1,600% higher than the industry average!) He paid just 67 cents per click.

We also set Steve up in our Auto Student Conversion System to make the most of each lead. Every new prospect was sent follow-up messages from his team through text message, voice mail, and more...all tailored to his RTO. He started seeing positive results almost immediately...

What Steve loves most is that he knows every single lead he pays for is being pursued in a natural, non-pushy way. He knows he’s making the most of every possibility and giving leads the greatest possible chance to become paying students.

What we love most is that Steve says his leads are actually appreciative of being chased. He has messages from some of them saying how refreshing it is to feel like a priority and to not have their enquiry just disappear into the ether. Proof that good marketing feels good, not pushy!

Want to learn more about the Lead Gen Pro Package?

For you if: You’re an established RTO, vocational trainer, or adult educator who wants to enrol more paying students...without having to find, chase, and nurture them manually.

The Lead Gen Plus Package will take a stranger on the internet and turn them into a red-hot prospect. Your new leads will get to know your institution through an email follow-up sequence from your team. They’ll learn what you’re about, feel heard and listened to...and once they’re warmed up and ready, they’ll be invited to book in for a call with you.

The end result? Your team has a calendar full of calls with interested leads who are ready to close. The system do all the heavy lifting...and you get to feel the rush of hearing the “yes” at the final step!

"With the Lead Gen Plus package, Heidi generated $474k in revenue with only $68k in ad spend."

When Heidi came to us, she was struggling to make any headway because she had no reliable source of leads…(She’d been using a call centre for years and it just wasn’t working anymore, the lead quality was getting worse, the number of leads down AND the cost going up).

She had no plan to turn them into paying clients. She was considering buying one of those booths in a shopping centre to try and attract clients.

Our plan? Create a Facebook campaign to generate targeted leads and write a follow-up sequence to turn those leads into paying clients. Every month, we reviewed Heidi’s results to tweak and optimise the system (ongoing campaign optimisation is just one of the benefits of having us as your business growth partner.)

Here’s a quick look at Heidi’s progress over time, showing the power of continual optimisation of her strategy:﻿

Needless to say, she never took out that booth in the Shopping Centre ;)

Want to learn more about the Lead Gen Plus Package?

For you if: You’re an educator who already has a killer follow-up and sales system in place. You know how to close a lead...you just need more of the right ones!

Our goal isn’t to get you more leads...it’s to get you more paying students. Most of our clients need help with follow-up to turn those early prospects into red-hot leads...but some clients already have a kick-ass follow-up system in place. So we created a custom package to help you get more targeted leads at a lower cost.

"With the Basic Lead Gen package, Leonie was able to reduce her cost per lead by 85%...which helped her scale her lead generation."

When Leonie came to Student Convert, she was already working with her second of two top-level agencies. She was achieving leads at a cost of $40-85 per lead with huge fluctuations — some leads cost upward of $200 each. At those costs, she could only afford about 10 new leads per month.

We knew we could do (much) better.

We rebuilt her ads campaign from the ground up, focusing on the emotional triggers of her audience to create hyper persuasive ad copy. And we tested everything individually to zero in on the top-performing ads.

We were able to get Leonie’s lead costs down to $6-$10 per lead (which about 15% of what she had been paying!) As a result, she was able to redirect the money she saved into scaling. So she now receives about 400 leads per month (40x more leads...with the same amount of ad spend!)

Now that the business is out of survival mode, Leonie is able to focus on securing strategic partnerships to grow the business even further. She says the consistency for her trainers has been amazing and she’s seen huge improvements in the morale and security of everyone on the team.

Want to learn more about the Lead Gen Pro Package?

I had been trying to get a course into high schools for over 4 years and with no success. I even hired some of the “best” (and most expensive) digital marketers in Australia, with ZERO results to show for it.

Student Convert showed me a different approach to marketing for half of what I had paid in the past. They got my RTO into over 50 high schools and generated over $25 Million in increased revenue.

Now they run all our marketing with every course we have on scope. They’ve made a massive difference our business and our lives. I can’t recommend them highly enough.

From the first meeting, I felt that Student Convert understood me, and they understood my RTO.

The automations are a game-changer for us. Emails, SMS's, automated phone messaging, call recording for staff training, self booking and rescheduling missed appointments and more... it's very cool.

They’ve helped us customise lead follow up for every single course we have, and run email, Facebook and Google marketing campaigns. They are now helping us increase our student numbers by consulting us on our sales process and phone sales.

They are a true strategic partner for us.